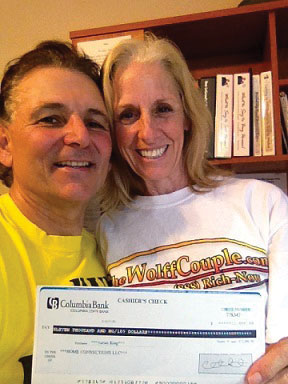 Yessss!! We closed on our first deal. It was more than 11 weeks coming (of course, we put in many other offers until this one re-surfaced), but we can truly say with a whole heart how incredibly valuable your motivation, faith in us and audacity in making us stay the course has been. Thank you, thank you, thank you!

The deal summary: This deal came about because of a response to a Craigslist ad that Phil saw and immediately called late one night. The owner responded enthusiastically by saying, “either you take it, or I’m just walking away, and the bank can have it back.” Upon arriving at the property the following day, Phil encountered a fairly new house in a fairly new subdivision.

The house had barely been lived in. The owner had just finished a nasty divorce and just wanted to get rid of it. There were delinquent bills, and HOA fees hadn’t been paid in a year. By now, the owner just wanted out. We explained the way he could immediately get relief would be to sign over the deed, and we would take responsibility for the payments from here on out and find a buyer who would live in it.

Things went textbook like until the wife caught wind of what was taking place. Although she was not on the title nor the loan papers, she threatened to sue and go after the house. The owner somehow felt loyalty to her and disappeared from the scene after we had a signed contract and were to close within a couple of days. This is where the power of having a Mentor comes in and having an attorney who is on your side. Our attorney was available if we wanted to go after the owner on specific performance. We didn’t know whether it was worth it or not. After consulting with our mentors they gave us the confidence we needed to go ahead.

We had to track the owner down as he had moved. Our attorney found his mailing address and had delivered a package from his office spelling out the consequences of not following through on a legal binding agreement. Magically, the day after he was contacted, the owner called us out of the blue. He agreed to go to our attorney’s office and close.

With deed and keys turned over to our company, we commenced marketing to sell.

After a little over a week of marketing, we got a buyer who called us.

They liked the house so we drew up an agreement and collected a $1,000 nonrefundable check. Three days later we collected the rest, and they are the happy tenant buyers of our house that we got for FREE.

Thank you again for having such wonderful mentors that kept us at it were always there for us.

This has been a confidence builder, and we believe that this is only the breakthrough and beginning of greater things to come.