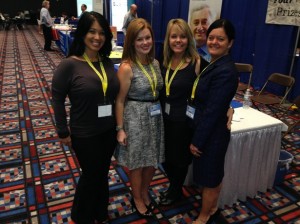 Well, I can’t believe I’m doing this. My staff has actually talked me in to personally participating in this blog. Yes, it will be me communicating, not someone talking for me. Please don’t expect me to be on here with mindless chatter multiple times a day. I have committed to answering this blog at least once or as often as I can get around to it. You’ve got to remember, I’m 67 years old and up until three years ago, hadn’t sent or received my first email, so this is a giant leap for me. 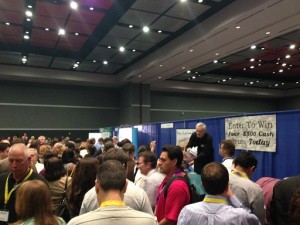 We just recently returned from a speaking trip I made to Houston to address the Lifestyles event, which is a once a year event put on by Del Walmsley who happens to have a pretty good following in the Houston market in the apartment niche. We were really impressed by the size of the event with over 2,500 people in it. I got to talk for a whole 45 minutes, but we put quite a few people in a 1 day workshop where I’ll be able to go back on the 15th and spend the day with them telling them what we do and how they can get started.

Russ Whitney spoke just before me followed by Dell and I’ve got to tell you, for me to create a 45 minute speech was no easy task, but I pulled it off. 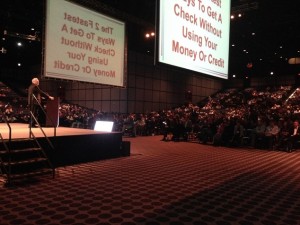 Ron on Stage at Lifestyles Expo

I’ve included some pictures. The first one is with the four musketeers who went with me to Houston to manage the crowd. They include Shawn, Jennifer, Debbie and Nicky. And I must confess they did a masterful job of handling the crowd because we were in a trade show booth all day long and it was non-stop.

Next is a picture of me standing on a chair giving away $2,000 in cash to four lucky winners that day. It’s amazing how many people will congregate to actually get cash. Well, four lucky winners went away with $500 more than they came with. 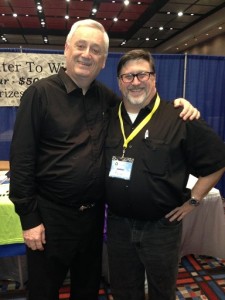 There’s also a picture of the big, dark arena we were in which was a miserable place to speak, but we made do. And below that is a picture of me with Alan Langston who is one of the leaders in the Rich Club in Houston and also a member of my REIA Mastermind group consisting of about 15 REIA group leaders throughout the nation. I’ll be working with them in the month of March doing their club meeting and a 1 day workshop for them as well.

Okay, you can use this blog for whatever you want to chat about including questions about real estate or about personal things. I’m not afraid of any question you want to ask and If I don’t know the answer, I’ll make up something anyway so have at it.